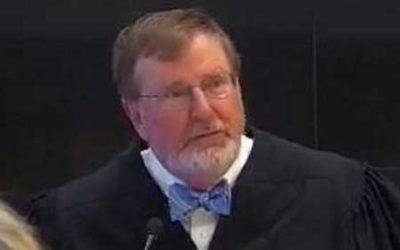 Judge Robart Should Be Impeached!
(Washington, D.C., February 4, 2017). Today, Larry Klayman, the founder of both Judicial Watch and now Freedom Watch and a former federal prosecutor issued this statement in the wake of the outrageous and patently illegal decision of a federal judge in Seattle to place a temporary restraining order on the recent executive action by President Donald Trump to put a 90-day hold on immigration from 7 Middle Eastern countries, all of which harbor huge numbers of Muslim terrorists bent on harming the United States. Klayman had this to say:

"The ruling is regrettably not surprising, as this judge not only disobeyed and flouted the law but apparently was more intent on making a name for himself in a very leftist state, Washington, and around the nation. While he was nominated by former President George W. Bush, this means little to nothing. The Bush family and many of its Republican establishment officials, after the unsuccessful presidential campaign of Jeb Bush, not only harbor an animus against President Trump, but W.'s appointed federal judges during his failed administration were generally not strict constructionists of the Constitution, or the rule of law. In addition to this renegade Seattle judge, James Robart, who also has taken over control of the Seattle Police Department, I am reminded of another W. appointee, federal judge Murray Snow who presides in the federal court in Phoenix, Arizona, who not only also has taken control of the Maricopa County Sheriff's Office, but unethically persecuted former Sheriff Joe Arpaio, boasting to his wife that he was bent on destroying Arpaio while presiding over a contempt trial sparked by the ultra-leftist and itself unethical ACLU.

"The bottom line is this: Judge Robart has illegally and unconstitutionally blocked executive power to curtail immigration of non-citizens and non-permanent residents, all of which have no rights to enter this country at will. Here, there was not even a bar put in place by President Trump, but simply a temporary hold on issuing visas to allow time to put in place an extreme vetting process to weed out terrorists. Thus, President Trump's reaction to this outrageous grab of judicial power was mild. Judge Robart should be impeached for his blatant political act and illegal grandstanding, obviously designed to make a name for himself.

"Finally, this underscores why Freedom Watch's Judicial Selection Strike Force Coalition is so important an endeavor. There currently are about 100 judicial vacancies on the federal lower courts and we intend to vet and recommend judges to President Trump for appointment who adhere to the Constitution and the rule of law in general, like Supreme Court nominee Neil Gorsuch. Currently, by and large what we have on the federal bench, with some exceptions, are 'politicians in robes.' This is very dangerous, as federal judges are our most important public servants, as they were intended by the framers of the Constitution to be independent and free of politics to protect We the People from the tyranny of the other two branches of government. What we see with Judge Robart's illegal ruling ironically is 'judicial tyranny'!"

See our Judicial Selection Strike Force Coalition at www.judicialselectionstrikeforce.org or go to www.freedomwatchusa.org.