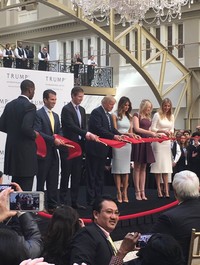 Judge says 'emoluments' lawsuit against Donald Trump can proceed
By Stephen Dinan
The Washington Times
July 26, 2018
President Trump's proceeds from his business empire are "emoluments" under the Constitution, so a lawsuit challenging the president's refusal to distance himself from his hotels can move forward, a federal judge ruled Wednesday.

District Judge Peter J. Messitte said Maryland and the District of Columbia have "convincingly argued" that Mr. Trump may be enriching himself from his hotels while serving as president.