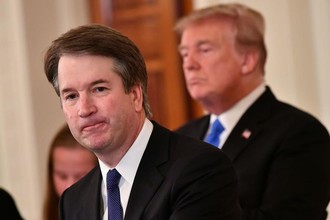 Kavanaugh's Confirmation Means SCOTUS Has Become a Partisan Institution. Only One Thing Can Hold Back Trump Now.
By Yascha Mounk
Slate Magazine
October 7, 2018
When Donald Trump was elected, scholars of American politics ferociously debated the future of the Republican Party. Optimists argued that Trump had little support in the GOP, and would slowly be reined in by movement conservatives like Paul Ryan and Lindsey Graham.

Pessimists like me argued that Trump had a lot of support among the Republican base and would be able to reshape the party in his own image after a protracted civil war. He and his allies would start running primary candidates to challenge more traditional conservatives and eventually replace the current crop of officeholders.