Klayman: I Predicted This: Roberts and Kavanaugh Are Both Unprincipled!
Go to www.FreedomWatchUSA.org to Support Our Judicial Selection Strike Force. Also Donate and Share! 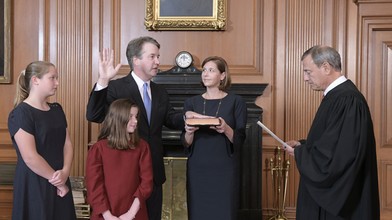 Conservatives' takeover of Supreme Court stalled by John Roberts-Brett Kavanaugh bromance
By Richard Wolf
USA TODAY
April 7, 2019
WASHINGTON — The conservative takeover of the Supreme Court that was anticipated following President Donald Trump's two selections has been stalled by a budding bromance between the senior and junior justices.

Chief Justice John Roberts and the court's newest member, Brett Kavanaugh, have voted in tandem on nearly every case that's come before them since Kavanaugh joined the court in October. They've been more likely to side with the court's liberal justices than its other conservatives.